The Most Wasteful Country of Internet Quota in the World, Indonesia Included?

How many internet quota do you use for a month? If you think it's already very wasteful, wait until you see the most wasteful quota countries in the next world.

What internet quota do you use in a month?
Like the need to eat, now we also need an internet quota to carry out activities on mobile phones. Without the internet, many communication activities cannot be done.

The internet does not come free, you have to subscribe to an internet package from a supporting telephone operator. Some have a limited quota, some offer unlimited internet packages.

Well, here is a country with the largest internet quota usage in the world. Come on, see the full list

The Most Wasteful Internet Country in the World
The internet is a communication network using interconnected electronic media using an internet protocol formed by the United States Department of Defense in 1969.

Simply put, you use the internet everyday to be able to connect with certain services such as Google, Instagram, to the site elbongultom that you are opening.

The internet was crowded in the 20th century. Initially only on computers, then developed to other devices such as smartphones.

Now, the internet has become one of the needs for teenagers. In fact, to attend education at school or college, you need the internet.

To get internet, you have to subscribe to a telephone operator that provides internet services. The price offered varies.

In the world, the price of internet packages varies from the cheapest in the price range of 0.26 USD or 3 thousand rupiah per 1GB to more than 20 USD or Rp280 thousand per 1GB.

Quoted from Forbes, India is the country with the lowest internet prices and Switzerland being the highest. 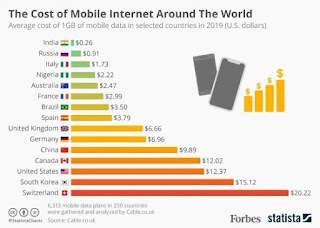 While Indonesia itself has internet prices in the range of 2.8 USD per 1GB. Making it between Australia and France. However, unfortunately Indonesia is not the country with the largest amount of internet usage.

Likewise if seen from the average number of internet usage in Indonesia which is not more than 2GB. Makes it much smaller than other countries.

Then what countries have the largest amount of internet usage? Here's the list based on data from RS Components:

First is Finland, with a monthly internet usage of 15.45GB per capita. This number is supported by the number of up to 5 million users.

The number of internet users in Finland accounts for 93.5%, almost close to the total population of 5.4 million.

Furthermore, Austria has an average internet usage of 11.17GB per person. This number is very large considering the Austrian population of 8 million.

Through the Austrian population, 87% are internet users. This figure is equivalent to 7.6 million people as active users who spend an average of 11GB per month.

When viewed from the time of internet usage, Austrian residents spend around 5 hours active internet / day. This figure is below Indonesia which touches 8 hours / day.

Well, Estonia is the next country in Europe that has the largest number of internet usage in the world. Estonia recorded a figure of 7.16GB.

This number can be achieved thanks to the population that is not as many as other countries. Estonia only has 1.2 million inhabitants and 78% are internet users.

Furthermore, Latvia has an average internet usage of 6.73GB per person. Just like before, this country has a population that is not so much.

Latvia only has a population of 2.2 million and 67% actively use the internet.

This number represents 59% of the total Lithuanian population in 2010. Few internet users made it fifth in the country with the largest average internet user in the world.

Amount of Internet Usage Based on Region
However, when viewed from the number of users shared into various regions. The results are quite surprising, because Asia with the highest number of users actually has the smallest average usage.

Quoted from the Ericsson Mobility Report, North America is the country with the largest number of internet usage in the world. An average 5.1GB internet quota is used by each person per month in 2016.

In fact, in 2022 it is estimated that the average internet usage will continue to grow until it reaches 25GB per person in a month. The amount of usage is also supported by the growing speed of the internet. 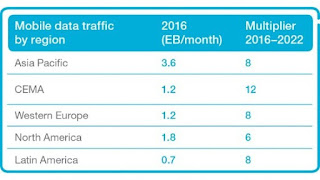 Apart from the comparison of internet activities between countries, Indonesia is still in a stage that has not been wasteful of quotas. This is caused by many factors such as the number of internet users, internet speed, and others.

The final word
That's the most extravagant internet country in the world, of course Indonesia is not yet in the wasteful stage, huh.Write your opinion in the comments column, yes. See you in the next article